SCHOTT is a leading international technology group in the areas of specialty glass and glass-ceramics. The company has more than 130 years of outstanding development, materials, and technology expertise and offers a broad portfolio of high-quality products and intelligent solutions. SCHOTT is an innovative enabler for many industries, including the home appliance, pharma, electronics, optics, life sciences, automotive, and aviation industries. SCHOTT strives to play an important part in everyone’s lives and is committed to innovation and sustainable success.

The parent company, SCHOTT AG, has its headquarters in Mainz (Germany) and is solely owned by the Carl Zeiss Foundation. Its more than 15,500 employees worldwide, of whom 5,500 are based in Germany, most recently generated revenues of EUR 2.08bn, 86% of which was generated abroad.

"This project in cooperation with Nomentia and Deutsche Bank has successfully digitalized an important area of bank account management. We are also convinced that far more is possible. We aim to keep focussing on this and invite all others working in treasury to do as we have done. This is the only way that completely digitalized bank account management can become reality."

Bank accounts under the microscope

Bank accounts are the crux of every treasury department; central to every key process. At the end of the day, every financial transaction is reflected on a bank account. This is why large corporates generally have dozens if not hundreds of accounts which their head offices and subsidiaries have to manage and check. These accounts are distributed around the globe, denominated in various currencies, and held at numerous banks. Retaining an overview is, therefore, no easy task. What about the number, status, and purpose of accounts? Are the account signatory permissions still up-to-date?

"With over 60 group entities and more than 200 bank accounts, managing these accounts takes a lot of time. That’s why our top priority is for as much work as possible to be dealt with by our IT systems."
Dieter Worf, Head of Treasury, Schott AG

Attention to detail has always been a core element of SCHOTT’s DNA. This technology group is currently manufacturing glass-ceramic segments for the Extremely Large Telescope (ELT) which is being constructed in Chile’s Atacama Desert. It is, therefore, no surprise that SCHOTT also insists on maximum transparency when it comes to managing its bank accounts. The group is playing a pioneering role here because what may sound logical has actually taken a long time to become standard practice: an automated reconciliation process that forms a bridge between treasury departments and banks. The challenge here is enabling corporate IT systems and those of banks to automatically communicate with each other in a standardized language.

SCHOTT implemented Nomentia in 2002; a solution that is designed specifically for integrating different systems. In the course of a brainstorming session with the software developer Nomentia, the treasury team at SCHOTT decided as early as 2018 to manage the first element of its bank account management processes by means of a workflow and to handle bank communication via automatically generated messages. The idea behind this: completely automatically checking whether certain accounts at the bank are active and which individuals have signatory rights to these accounts.

"We liked the idea of being able to automatically check the status of our accounts at the bank not only because of the time savings. The option of checking who has signatory rights to an account at the press of a button also helps us in terms of compliance with our policies."
Jochen Alt, Treasury Manager, SCHOTT

While the idea is not a new one, in the past, one of the reasons why implementations failed, was a lack of willingness on the part of many banks to get to grips with the issue. The use of Nomentia, meant that a suitable tool was already available in which all of SCHOTT’s bank accounts had been captured. The only thing missing was to find a banking partner who was prepared to allocate resources to the project. The treasury team at SCHOTT, however, was able to convince Deutsche Bank; one of its core banks for many years. The trio was therefore complete and the project could be launched.

Request, status message, and account report: from concept to workflow

The first step was for the project team to jointly define the target process for account confirmations. Why? Because only processes which adhere to clear rules can be translated into a workflow. Given that this was literally a greenfield project, it was necessary to precisely coordinate everything on the drawing board. Nomentia moderated the drafting of flow diagrams in order to clearly define the end-to-end process. This is where years of experience in the areas of system integration and data exchange really paid off.

"We liked the fact that Nomentia focussed not only on its own system but on the entire process. And Deutsche Bank was totally committed from the outset to jointly implementing this solution despite a few minor stumbling blocks along the way."
Dieter Worf

The technology in detail: The formats defined by SWIFT are the precondition for data exchanges. The account report, as it is known in SWIFT jargon, is the last of four message types that are involved in the request process.

After several rounds of coordination, the process steps had been defined and Nomentia was able to set up the first prototype of the workflow. The first acmt messages were generated and sent to Deutsche Bank to be checked. After some finetuning, Deutsche Bank achieved a breakthrough: its system was able to receive and respond to a request captured in the acmt format and transferred via the SWIFT network in a fully automated fashion. 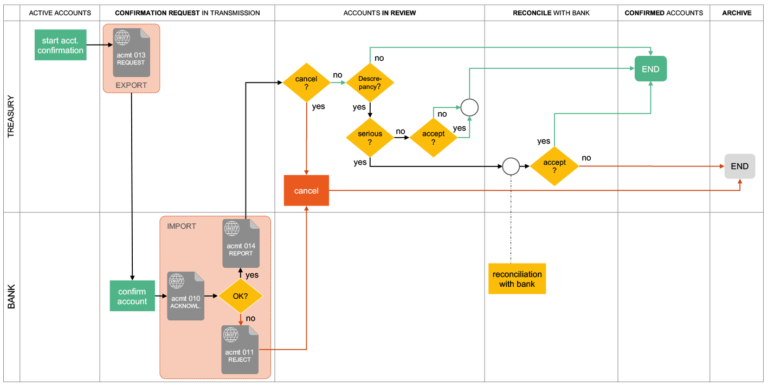 Flowchart illustrating account confirmation process: The exact reconciliation of the messaging process and the resulting, various workflow statuses formed the basis for implementing the project.

The Nomentia workflow and the automated exchange of data now mean that SCHOTT can have its active accounts checked and confirmed by the bank at the press of a mouse button. An error message is generated if the bank cannot identify the accounts delivered in its systems. If the accounts can be identified but the signature authorizations aren’t correct, then the accounts are flagged in the workflow for clarification with the bank. If all the data are 100% correct, the status of the accounts changes to ‘confirmed’, and the date of the confirmation is added.

Since the Go-Live in early 2019, SCHOTT has been able to fully automatically check and confirm its accounts. The treasury software solution TIP generates an account report request and sends this via the SWIFT connection to Deutsche Bank, and also the acknowledgment, any rejections and as well as the account reports are then processed without any manual inputs. This makes sending emails redundant and avoids any communication-related misunderstandings and transfer-related errors as well as security loopholes.

With the aid of the workflow, SCHOTT can now reconcile bank account numbers, currencies, and signature authorizations with just a few mouse clicks. A further aim is to automate the annual account balance confirmation process which is part of annual closings.

The enormous potential of eBAM, however, lies elsewhere: the technical basis and the experience gained in the course of this innovative project have been leveraged in a second project phase to automate other processes related to opening, amending, and closing bank accounts. In other words, completely paper-free bank account management which doesn’t rely on fax machines or letters and which also significantly simplifies and accelerates internal coordination work. This means that it is now also possible to set up new and to extend or limit existing signatory authorizations. Smart workflows ensure that an end-to-end audit trail based on the multiple controls exists in the background. Features which are currently only available in connection with Deutsche Bank accounts in Germany will in future also be available for international accounts.

"This project in cooperation with Nomentia and Deutsche Bank has successfully digitalized an important area of bank account management. We are also convinced that far more is possible. We aim to keep focussing on this and invite all others working in treasury to do as we have done. This is the only way that completely digitalized bank account management can become reality."

The vision for the future is for other banks to do what Deutsche Bank has done and to make their systems ready for eBAM so that corporates can soon check and manage the majority of their accounts, both domestic and international, at the press of a button.

"We have made a start and now further steps can be taken. By the time the Extremely Large Telescope enters service in 2024, our view of our bank accounts will also be a lot clearer."

We’d love to meet you!

Have you explored our solutions and you’ve found them interesting? We’d love to meet you and show you more!

Nomentia has a hyper modular approach. Take only the solutions that you need and integrate them into your existing technology stack.

Connect with your banks easily

We help you to connect with over 10 800 banks globally through host-to-host, SWIFT, and local connections.